Top 7 Slimmest Phones in The World in 2023 (Amazing Inventions) 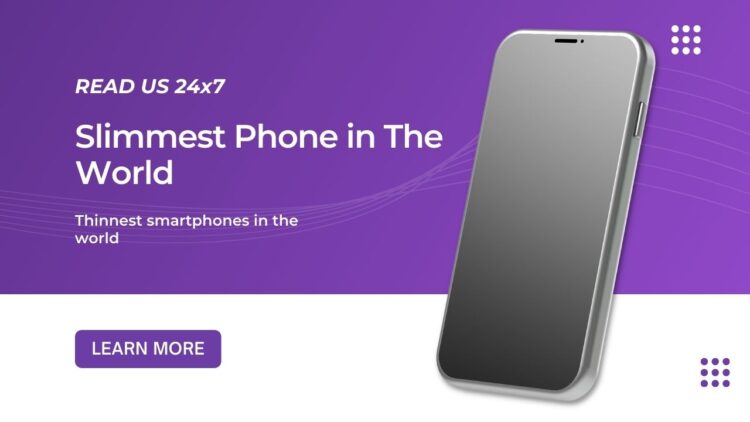 We all know that having a slim phone is a necessity, but it can be challenging to find one that is also high quality. With the growing age of technology, it seems like every time we turn around there’s a new, slimmer phone on the market. But with all of these options, how do you know which one is right for you?

The Samsung Galaxy S20 Ultra is one of the company’s updated flagship phones. It has a massive 6.9-inch display, making it one of the largest phones on the market. But despite its size, the S20 Ultra is still quite slim. It’s just 8.8mm thick, which makes it thinner than most other Android flagships.

The Gionee Elife S5.1 is another Chinese smartphone that was released in 2014. It’s one of the slimmest phones on the market, with a thickness of just 5.1mm.

It is powered by a 1.2GHz quad-core processor and has 1GB of RAM. The phone has an internal storage of 16GB, which is expandable up to 128GB via a microSD card.

It has an 8-megapixel rear camera and a 5-megapixel front-facing camera. The Elife S5.1 runs on Android 4.4 KitKat and is backed by a 2100mAh battery. All of these qualities make it one of the slimmest smartphones in the world which is available in 4 colors Black, Pink, Blue,  and White.

The Oppo R5 is another Chinese smartphone that was released in 2014. It’s one of the slimmest phones on the market, with a thickness of just 4.85mm which makes it a very thin smartphone with a metal body. Its sleek design of it makes it ideal for those who are looking for a thin and light smartphone.

The Oppo R5 has a 5.2-inch display with a resolution of 1920×1080 pixels and is powered by a Qualcomm Snapdragon 615 processor. It has 2GB of RAM and 16GB of storage, which is expandable via a microSD card. With all these specifications, it’s a mid-range smartphone but it’s still a reasonable choice for someone looking for a slim phone.

The Sony Xperia Z5 Compact is a small phone with a big heart. It may not have the largest screen or the most advanced specs, but it’s one of the most compact and lightweight phones on the market. It’s just 8.9mm thick and weighs only 138 grams.

These are the top 7 world’s slimmest phones, All these phones are thin and lightweight but still have powerful features like dual rear cameras and long battery life.

What is the price range of the Slimmest Phone in the world?

The price range of the world’s slimmest phone can vary depending on the make and model of the phone. Generally, however, the price range for a slim phone is between $300 and $1000. Some phones, such as Oppo R5, can cost as much as $403, while others, like the Vivo X5Pro, are available for $802.

Pros and Cons of having the World’s Slimmest Phone

The pros of having the World’s Slimmest Phone are its incredibly sleek design, its super lightweight, and the fact that it is extremely thin.

You are sure to turn heads in public when you pull out the World’s Slimmest Phone. People will be amazed at how thin and lightweight the phone is, and you’ll definitely get some compliments on its sleek design.

The phone you choose is a personal decision, and there are a lot of high-quality phones on the market to choose from. But if you’re looking for something unique and eye-catching, I would recommend experimenting with the World’s Slimmest Phone. It’s sure to turn heads and get you some compliments, and you’ll love how sleek and lightweight the phone is.

I hope you enjoyed this article. Please feel free to share it with your friends or family if they are interested in learning about the World’s Slimmest Phone.

How To Unlock Your Snapchat Account: The Definitive Guide (2023))