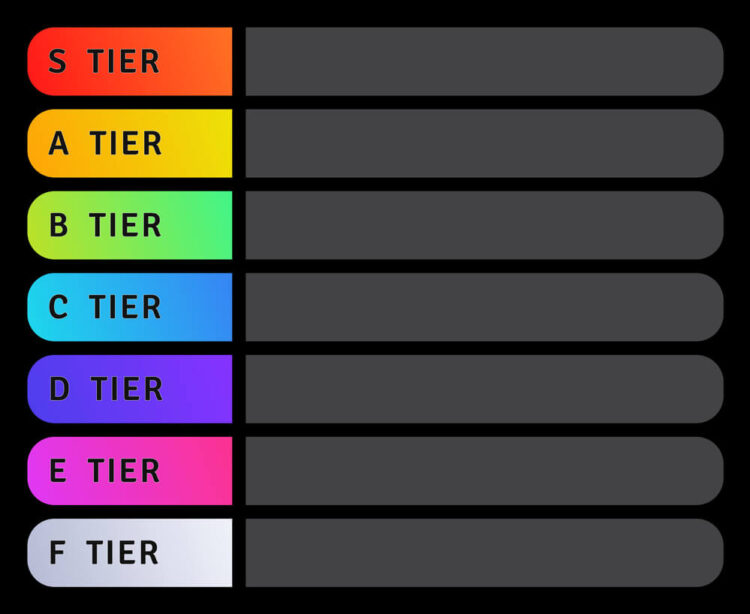 Whenever we see a tier list, we assume it to be subjective rather than absolute. However, some tier lists can be subjective, and some can be absolute. For instance, there are games like Smash Ultimate where the game developers make the tier lists. At the same time, there are also a few games where gaming experts make tier lists on the basis of personal experience. Before going into depth, let us talk about what is tier list?

According To TopTierList, A tier list is a hierarchy of characters starting from top S, A, B, C, D, and F. The general and basic science behind the Tier list is to give an idea to the gamers that can distinguish between characters based on their status, power, rarity, health, etc. Tier Lists are useful from a broader perspective when there are various playable characters or weapons in the game. These Tier lists give the gamers and major concept of premium and common. Subsequently, Tier lists put gamers in a situation where they have to choose between characters. This can result in either good or bad ways. For instance, if you are good at playing the character from the B tier list and you are able to defeat the character from the A tier list. Such situations often occur, which is called Tier Dilemma.

If you are from Generation Z, you will probably know about the Street Fighter gaming series. Street Fighter was a 2D one-on-one fighting game. With the release of Street Fighter, there were numerous characters to play with. Attracting millions of players made the community wonder which character is the best of them all. To rank each character was difficult, so it gave birth to the Tier List. Over time new games started to develop, such as Taken 4, which officially made its Tier list.

Tier list can be helpful for beginners who don’t have an idea of anything in the game. Tier list gives a broader idea of premium equipment, weapon, character, etc. However, for an avid gamer, tier lists don’t really matter. As Avid gamers, they have the idea of the slightest detail or any particular topic. A tier list can be regarded as a list that gives an idea to the user that makes it easy to choose from a variety of options.

Being a fanboy makes the user subjective in every detail. For competitive players, every inch of description is known to gain a competitive advantage. Every tiny detail adds to the player’s performance to be efficient and effective. Looking at the tier list in the case of characters is a better option for the short run to enjoy the game simply. However, when playing multiplayer, professionally, or competitively approaching tier list is not always helpful. For instance, the user chooses a character named “X” from the S tier list against the character “Y” from the A tier list. It is not guaranteed that X will defeat Y due to the privilege of being S tier character. Most gamers are the target of the Tier List Dilemma, which causes hurdles in their performance growth. Being at the bottom of Tier does not mean that every character will defeat you.

In light of the Tier list, the alphabet S comes from Japanese roots. In Japanese culture, S stands for supreme quality, whether it be cinema, car, stadium tickets, etc. As mentioned before, the concept of Tier list officially started from Taken 4, which is a Japanese game. In order for community members to ease, other developers also adopted the same Tier list pattern as that of Japanese. S in tier list stands for supreme or super. S tier includes characters, weapons, equipment of premium quality. With premium-quality comes premium cost. S tier list includes expensive items and often rare ones.

Following the hierarchy from top to bottom, the A tier is second to the hierarchy lying below the S tier. A tier includes items that less premium than those of the S tier. However, it does not mean S tier is always dominant on A tier. A tier list generally has characters, weapons, items from rare categories. A tier list components also cost significantly and sometimes more than an S tier.

Down the hierarchy from A comes the B tier list. B tier lists include things that may be rare or epic. It totally depends on the game you are playing. Not to mention B tier includes lethal elements that are more deadly than S or A tier list, depending on the situation. Moreover, the B tier list may well cost a bit less than S, and A tier lists elements.

After the B tier list comes C Tier. To give a general idea, the C tier list includes elements that are much more likely to be gained in the mid-level game but again depends on the game you are playing. C tier lists characters or weapons most commonly used by a cost that is rather cheap than expensive.

D tier list elements can be found in the starting levels of the game. They may well be free of cost or can cost cheap if you buy them. To give a general idea in Counter-Strike Global Offensive, when new cases are added, they cost way more. After a while, the market price falls due to an increase in quantity, and they are often acquired at the end of the competitive game. To clarify, these cases in the start were from high tier and then moved down the hierarchy to D tier list of cases. Such cases may be acquired for free or can cost up to a few cents.

The F tier list includes elements that are considered to be the worst. These list elements are free of cost and given to the user at the start of a new game. However, the F tier list elements shouldn’t be taken lightly, given that the right situation can result in a deadly manner.

With that said, we conclude whether the tier list is helpful or not. Understandingly, Tier lists give a broader perspective of specific things to the beginners however it is completely unfair to rank characters, items, weapons, equipment on the basis of their peak performance rather than average performance. Ultimately, it is a matter of personal preference of what suits you the best. It is always best to go for characters or weapons that best suit your game style. For instance, if a player is an impressive sniper, handling S tier assault rifle won’t make the player better. Subsequently, players to be better should always be dynamic that can adapt to different situations. Likewise, S tier or A tier does not guarantee perfect weapons, characters, equipment. In some conditions, the F tier may be dominant over the S tier.

5 Ways To Maintain Fitness When Working From Home