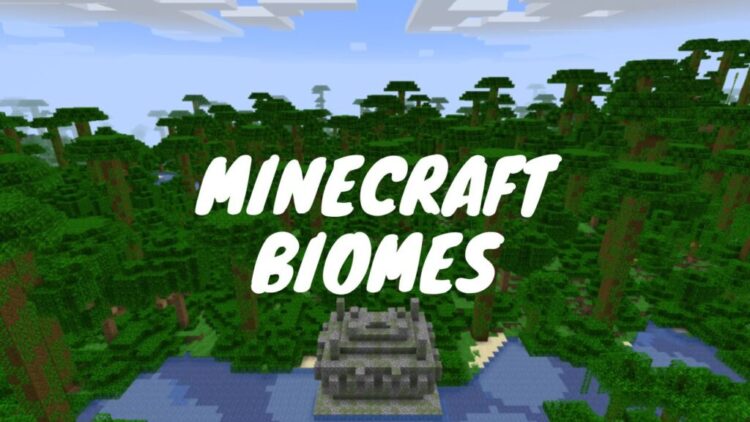 In Minecraft, biomes are regions distinguished by their unique physical characteristics. For the most part, biomes are what make each randomly generated world in Minecraft feel like an entirely different place.

As a Minecraft player, one of my goals was to go through all of the biomes. Unfortunately, I had no idea how many distinct biomes my Minecraft world contained. After a lot of digging, I was able to compile a comprehensive catalog of these ecological zones.

What is a biome?

Simply said, a biome is an area in Minecraft that has its own landscape, flora, and fauna. Forests and deserts are only two examples of the wide range of biome habitats possible.

What is a mob?

Mobs are “mobile critters” that have the potential to spawn in a variety of ecosystems. They can appear in many ecosystems and adopt a variety of dispositions depending on the circumstances.

Trees are uncommon in the treeless plains environment. Pigs, cows, sheep, and horses are just some of the docile mobs they produce. In most cases, these areas are adjacent to forests. Only in the sunflower plains biome will you discover these cheerful flowers.

Some forest areas have an abundance of suitable timber trees, making them ideal starting points for woodworking. The flower forest is another type of Minecraft forest, and it is home to practically every flower in the game. Normal forests can have a range of tree colours, from white birch to black oak. Just like only dark oak forests can produce woodland palaces, no other biome can produce them. Forests and houses alike may hide dangerous hordes of enemies. Large mushrooms occasionally appear there as well.

There are three distinct jungle biomes in the Minecraft universe. One is a typical biome found in the jungle, and the other is found at the forest’s periphery. Transitional zones between jungles and other types of biomes often have a variety of plant and animal species. A bamboo jungle is the third type and can be found inside bigger jungle ecosystems. Pandas prefer living in environments with a lot of bamboos.

Desolateness is a common characteristic of desert ecosystems. The cacti and brown bunnies that live there are found among the sand and sandstone. Villages in the desert, pillager strongholds, temples, and even lakes in the bottom of wells have all been discovered in these ecological niches. To put it another way, a desert lake biome is like finding an oasis in the middle of a dry wasteland.

The Taiga consists of a combination of jungle and woodland ecosystems. Pine trees and ferns are typical in their landscape. Wolf packs, fox dens, sweet berry trees, settlements, pirate strongholds, and more may all be found in Taigas. Giant tree taiga is a subset of the taiga biome characterized by enormous spruce trees and a ground cover of podzol. Wolves and arctic foxes are suitable predators in snow taiga ecosystems. Mountains, aggressive mobs, and the possibility of snow make the Taiga mountain biome more challenging to travel across.

Large swaths of snowy tundra landscapes characterize these biomes. There isn’t a tonne of wildlife, but polar bears and rabbits do make an appearance.

Large structures and chunks of ice are spread across the unusual ice spikes biome, almost like trees. Ice is abundant in this biome, but resources are even harder to come by than they are in the snow tundra biome.

It is common knowledge that swamps are extremely perilous environments in which to live. These ecosystems are known for the nightly occurrence of slime spawns and the generation of witch homes.

Acacia trees and herds of equines and llamas are typical of savannah ecosystems. Additionally, settlements and pirate outposts might spring up in these environments. Mountain ranges, lakes, lava or water falls, and random craters all populate shattered savannahs.

The typical badlands include plenty of red sand and huge gold veins. The area consists primarily of abandoned mineshafts, and aggressive crowds emerge at night. In more extreme cases, canyons can be seen through eroded badlands. Unlike typical badlands, which tend to form next to deserts, eroded badlands often form on their own. An example of a smaller biome, the wooded badlands are home to a sparse population of oak trees.

When an ocean meets a different type of ecosystem, a beach ecosystem forms. Sugar cane, sunken ships, hidden riches, and turtles all coexist with the sand. The beaches can get snowy at times.

When a rocky biome is formed next to a body of water, it often takes the form of a stone shore biome. These ecosystems tend to be somewhat little.

Sugar cane, sand, clay, squid, salmon, and drowning can all be found in river biomes because rivers often run through more than one ecosystem. Rivers in the winter are the same as usual, but they are covered in snow and less hostile mobs spawn there.

There are five different types of ocean biomes, the first of which is a basic ocean with plenty of seagrass, kelp, and fish. The marine life in the warm oceans is usually quite healthy and colourful. Coral reefs, home to dolphins, pufferfish, and other tropical fish, can form naturally in these ecosystems. Coral reefs cannot thrive in lukewarm oceans, but seagrass and kelp may. In addition to gaining access to ocean monuments, they also acquire cod and salmon. There may be less fish and other marine life in cold oceans, but you can still find cod, salmon, and dolphins there. Sometimes, in the midst of the ocean’s deep blue colour, you might spot monuments to the past. Only salmon, squid, and ocean monuments survive in the frozen biomes of the ocean. Polar bears may swim on the ice’s surface.

Rare and isolated, mushroom fields typically form in the middle of the ocean, far from any other biome. Mycelium forms huge islands that stimulate and expedite mushroom development. Mooshrooms are also common in this ecosystem. In this ecosystem, hostile gangs cannot develop.

Separate from the Overworld lies the Nether biome. Recently, the Nether received an overhaul that introduced new biomes including the Soul Sand Valleys and the Crimson Forests. The nether strongholds are home to rare materials. A variety of gangs hang out in this area, including blaze, hoglins, piglins, and ghasts. Now that the Nether’s biomes have been greatly enhanced and respawn anchors are available, it can legitimately serve as a player’s primary home.

There are typically five distinguishing characteristics of End biomes. If you build a portal to the End, you’ll instantly spawn in a new realm that exists independently of both the Overworld and the Nether. The setting here features a large central island surrounded by numerous smaller islands and landmasses. Smaller islands that float between bigger sections of the End and empty spaces are called “End islands.” The Endermen inhabit this area. Larger locations that serve as a bridge between the End’s central regions and its outskirts are known as the End’s midlands. There are Shulkers, Endermen, portals to the End, and cities in the End. The End’s principal cities and the forest of Chorus Trees are located in the highlands, the primary biome of the End. At the very edge of the nothingness, you can frequently find gateways that serve as exits. Like the beaches of the Overworld, the End’s barrens tend to be located on the outskirts of the region’s main areas.