Software Development Trends at the End of 2023 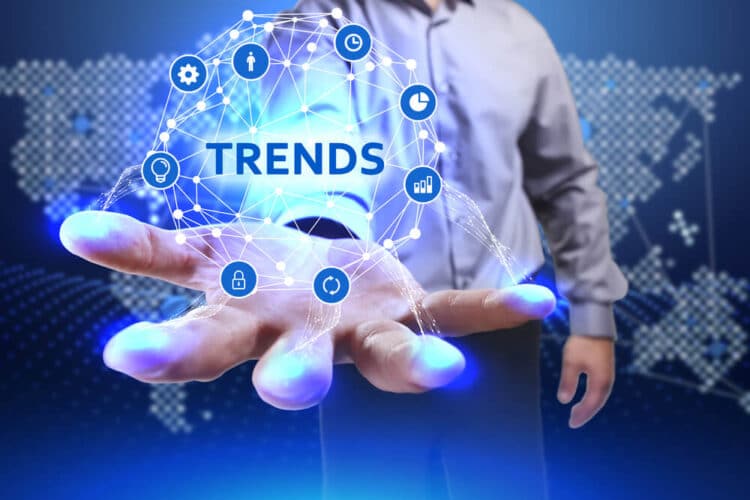 Every year there are many new software development trends that shape the industry in different ways. Even so, 2021 has definitely been unique as the COVID-19 pandemic has accelerated digitization and propelled changes that may not have otherwise taken place (or at least, would have taken much longer to take root).

Now that the year is drawing to a close, it is a good time to take stock of the main software development trends that have had a part to play this year.

Ever since 2020, cloud adoption has grown by leaps and bounds – and for good reason. It is a trend that has continued throughout 2021, as the global pandemic has made the benefits of using cloud services that can be scaled-up or scaled-down as necessary more obvious than ever.

The focus on cloud adoption has affected the software development industry in several ways. Not only are many software development companies migrating to the cloud, but it has increased the demand for developing cloud-based apps and services, as well as employing roles such as cloud native engineers.

In short software development has become a lot more cloud-centric – on all fronts.

While the popularity of languages such as JavaScript and Python remain undiminished, 2021 has seen a sharp increase in the popularity of more modern programming languages. Some of the more popular modern languages this year include Rust, Go, Dart, Kotlin, and Swift.

The reason why these languages have grown in popularity is mainly due to the features they possess, including conciseness, null-safety, type interference, and expressiveness. Rust in particular has quickly become the ‘most-loved’ language among programmers, and has attracted significant investments from both Microsoft and Amazon.

Although these languages are not likely to supplant JavaScript or Python (at least, not yet), it is safe to say that their popularity is going to continue to grow.

Blockchain technology has evolved steadily, and it is now being used for far more than just cryptocurrencies and money transfers. The implementation of smart contracts in particular has opened up a whole new world of possibilities for blockchain apps across numerous industries.

Cybersecurity is a growing concern for many businesses – especially as things become more and more interconnected than ever. In fact, has become a big priority in 2021 due to the ever-increasing number of data breaches, ransomware attacks, and other threats that have often resulted in significant losses for businesses.

Because of this trend, software developers have had to take steps to improve the security of the apps that they build. That involves far more stringent testing and debugging, as well as security testing that is carried out at each phase of the software development lifecycle.

All in all for software development companies to remain competitive, they need to commit to improving their security measures.

To put it simply, the Internet of Behavior involves tracking how people behave as they interact with apps and devices. That data can then be used to improve the user experience or for personalization and marketing.

The potential of the Internet of Behavior has made it a prominent trend for software development, and something that developers increasingly have to plan for and implement. As more devices join the Internet of Things, its importance is only going to increase.

Unlike traditional apps that need to be downloaded and installed, Progressive Web Apps (PWAs) load directly in your browser and can run on any operating system. Their use has been steadily gaining ground over the years, and is one of the major software development trends of this year.

A big part of the reason why PWAs are so popular is that they can be loaded quickly and easily. Additionally they have a wider reach since they can run on any operating system, and are more cost-effective as there is no need to develop different versions for different operating systems.

In 2021, a growing number of businesses have started to take advantage of PWAs and use them to improve customer engagement. Due to their success, the demand for PWAs has increased – making them a very influential trend in software development.

Native app development is also growing in popularity. While previously it was normal to build common apps that can run on several platforms by taking advantage of cross-platform tools – many companies are now starting to shy away from that in favor of native apps that are built for specific platforms.

Developing native apps as opposed to using cross-platform tools is definitely more costly, but the apps have better performance, efficiency, and a lower risk of bugs. At the end of the day that makes for a far better user experience, and allows the app to retain more users.

Seeing as it can directly affect the success of an app, it should come as no surprise that the demand for native app development has risen sharply as more and more businesses cotton on.

To sum it up – it is worth keeping an eye on these trends and taking advantage of them in the coming year.