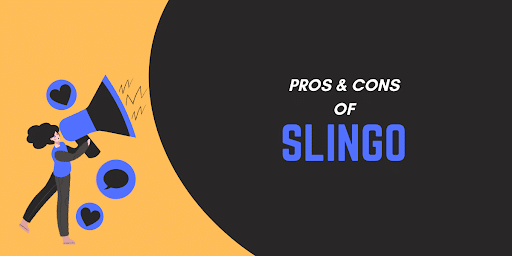 Sometimes we need to get the adrenaline rush to break out of routines and in the online gaming world, the players want also to feel something different. One of the best options to add spice to your life is to test the slingo game, an iconic game that has invaded the iGaming industry. This arcade game was created in 1994 by Sal Falciglia, a New Jersey real estate developer, and has increased its popularity among the players. Slingo is a combination of slot and bingo and those who want to have a unique experience with the slingo game variations should check SammyBingo’s slingo game sites at their convenience. Before you decide to dive in, let’s look at the pros and cons of this game.

As the game’s name suggests, slingo combines two popular casino games; slot and bingo. In this game, you will see the layout including a spinning reel that gives out five numbers per reel. This new version of bingo is easy as it does not require rules. Slingo is the best alternative for slot and bingo enthusiasts because this game allows them to apply their skills and knowledge of these two timeless casino games.

How to play Slingo?

The aim of the game is simple despite it is a combination of two different well-known games. To win, you have to get as many points as possible and accumulate them quickly. Slingo is then, a game of pure chance in which you have to spin the slot reels below the grid. After spinning, you have to check the grid whether displays any of the selected numbers on the reels. Five numbers can be marked off if you are found on the card. Same as the slot, you have also the chance to find the joker and extra symbols to increase your winnings instantly. You can find the Gold Coin, Free Spins, the standard Joker, and Super Joker displayed on the reels. Similar to the Wild on the slot, the slingo joker has the role to help you to cross off any numbers that appear in the column. You will be also lucky if you find the Super Jokers as they enable you to cross off any remaining number on their cards. The other extra symbols have common roles to increase your chance of winning except the Devils icon that will reduce in half your score.

Something original is always interesting as it is unique and different from others. It is the case of Slingo, a new version of the bingo game but blended with the slot. Slingo has existed for over 20 years and has entertained millions of players around the world. The slot is considered to be the king in the online casino because not only does this game offer an advanced level of thrill but there also are bigger winning chances for those who choose to play for real money. This social game’s popularity has boosted in 2015 when RealNetworks, the American provider of software and services sold this game to the British gaming company called Gaming Realms.

– Powered up by multipliers and bonuses

One of the significant advantages of playing slingo is the multipliers and explosive bonuses waiting for the players. These multipliers depend on the bet amount, so the more bet you place, the higher amount of money you will win. Some bingo sites can go up to x100 enabling you to gain amazing prizes. For example, if you place a £1 bet, you can win £100 from a single slingo game. This popular game is always packed with more bonuses and jokers that can bring an instant cash prize. Some slingo variants can offer free spins, coins, bonuses, and even progressive jackpots.

– You may keep on gambling

Although Slingo is attractive thanks to its mechanics and prizes, the bets cannot be controlled by the players. In other words, they spend more time playing so it has become difficult for them to set boundaries regarding their spending. Slingo is a thrilling game and with its various bonuses, playing this thrilling game is always interesting. Nonetheless, the gamblers should be able to control themselves to avoid the risk of becoming problem gamblers. There are no significant cons with regards to the rules of Slingo but everyone should be responsible. The gaming licensees and operators should also ensure that people will be prevented from gambling-related harm.