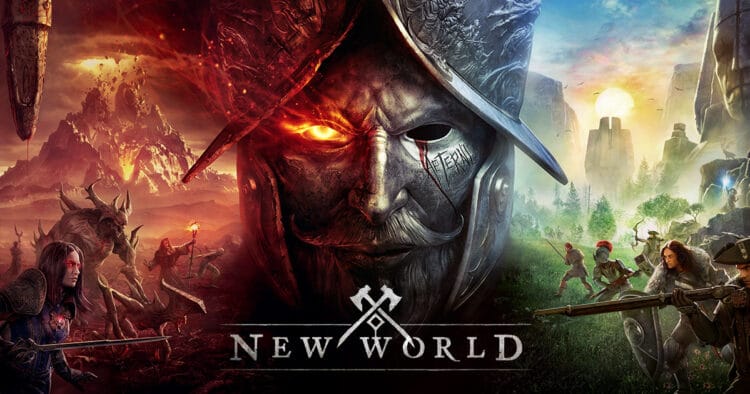 New World is the newest game from Amazon Game Studios, Amazon’s one and only first-party developer. As a massively multiplayer online (MMO) game, New World involves 1,000 players on a massive RPG island set in the 17th century. Focusing on real-world history and storytelling alongside non-historical creatures, magic, and general mythology, there’s a lot going on with the game. While the game is planned to have its release on September 28th, 2021, placing it in early access as of August, it’s already built up a decent story to go alongside its massive servers. So, let’s look at New World’s story.

As with the game’s title, New World takes place in the new world, this one being the land of Aeternum. Aeternum is a gorgeous land home to hundreds of unknown species with unique qualities. That includes Azoth, a substance which is rumored to contain the ability to bestow eternal life. You, a New World explorer, are in pursuit of Azoth, alongside the other 999 people within the island.

The thing is, the New World isn’t what it’s hyped up to be. While travelers keep flowing into Aeternum, there’s more than what meets the eye —there’s much, much more than just beautiful landscapes and unique geography. Aeternum is home to The Corruption, a force that prevents many New World explorers from warning others of their fates. After all, who’s to warn new explorers if they’re all left on the island to rot?

Supernatural events and unexplained phenomena top off the confusion aboard Aeternum, something that has kept the area’s explorers from reaching a cooperative state. Whether it may be in the form of The Covenant, floating items, unnatural statues, and lands, exploding skies or changing gravity, the New World has proved itself to be anything but normal.

Danger in the Seventeenth

The 17th century is a trying time. Piracy; the Great Plague of London; and now the infighting atop Aeternum. With the danger comes the need for eternal life, the one promise left within the New World. Of course, The Corruption is here to stop you. Arriving to Aeternum, it’s quickly apparent that the stories of old are anything but the truth.

Supernatural monsters and terrifying creatures coat the island, leaving danger at every turn. Free roaming enemies leave most areas dangerous and potentially fatal. The Corruption is there to protect and use Azoth for itself, and it’s not afraid to work against you. It has been corrupting the island for years, infecting and overtaken the living aspects of the island, affecting everything it touches.

Aeternum was discovered during the ‘twilight of the Age of Exploration,” a time in which any and every piece of new discovery was ripe for the taking. You’re part of the mission to survive and use Aeternum’s own resources for yourself, a task occupied by the hundreds of other souls across the island. After all, with a Fountain of Life covering an entire island, there’s quite a bit to covet.

Plus, it’s not just other players you’re fighting against. The Corrupted have held this island, slowly turning it for hundreds of years, and it’s not ready for explorers to undo its progress. Throughout your time on Aeternum, the Eternal Isle, you’ll come across Corrupted, whether in their single forms or in entire Corrupted Invasions.

While this territory is unknown to you, it’s not to The Corrupted. Its corrupted Grunts, Raiders, Snipers, Bombers, Brutes, and Bosses routinely attack the island, having fought against the invading forces for years. As you expand your Territory’s Settlements, you’ll be faced with a growing Corrupted. Remember, these foes grow alongside your allies and enemies, corrupting them both. Inevitable, you’ll fall alongside the hundreds of other Settlements in an attack from The Corrupted, which can wipe out your entire Territory. There’s a lot at risk on Aeternum.

While you and many others are new to the Eternal Isle, there have obviously been thousands before you. These original explorers original coincided in peace before idealist rifts and troubles fighting The Corruption began to appear. These schisms led to the creation of three factions which continue to dominate the New World today.

The Marauders are one of the three major factions, having been founded by militarist explorers. These original ideas have passed into the 17th century, providing the Marauders with a ruthless military force and conscience. The faction was founded to establish a free nation where the strong and independent can prosper and profit. This of course led to an even further divide among the people, with many believing that having a society built from the backs of the weak was one doomed to fail.

These believers formed the Syndicate, a secretive organization with a much different set of ideals. The Syndicate believes in restoring Aeternum to its state beforehand, ushering in a new age of enlightenment, one similar to the 17th century enlightenment across Europe. Moving against the Marauders, the organizers of the Syndicate believed that everyone should be able to prosper, setting those with the strongest minds on the way to ensuring the future would grow stronger. Boundless guile and intellect form the roots of the Syndicate, which oftentimes leads to struggles against the other two factions.

This would include schisms with the Covenant, a fanatical order charged with cleansing the land of heretics and defilers. To this group, Aeternum was not an isle to be taken. It was a project to be restored, letting the New World return to the way it was before. The founders of the Covenant tasked themselves and their followers to let Aeternum’s true nature return, restoring natural justice. Those historically aligned with the faction believed that the area’s supernatural activities were a result of divine intervention, something that continues today.

Of course, none of this is what we know in the present. Whether Aeternum has collapsed in its glory, The Corruption has won, or the supernatural has undone the island, there’s a lot that could happen. New World is still currently only in closed beta, meaning that the story is yet to unfold. Plus, as an MMORPG, the game is more dependent on its community.

The future is yet to be rewritten, and Boosting Ground is ready to make it that much easier for you. New World boosting is already available as a service, with many other additional aspects yet to be rolled out. Boosting Ground currently offers faction reputation boosting, leveling services, and boosting across 18 unique professions. For those struggling with the game and its fast-paced action, something uncommon to most MMORPGs, or for people just wanting an extra boost, Boosting Ground is here to help. With some of the best services in the industry (powered by professional gamers and industry-low price tags), we recommend you check out Boosting Ground’s New World Boosting services for any in-game boosting.