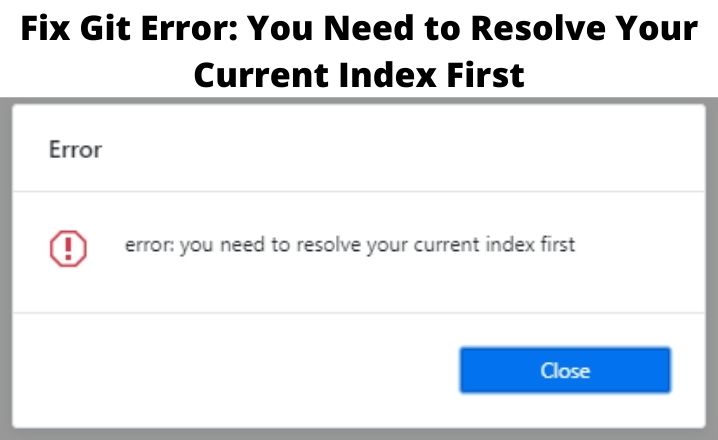 The error: You need to resolve your current index first in Git means a merge conflict and you are not able to try out another branch if you don’t resolve the conflict. This error message often indicates that a merge has failed or file conflicts.

Which files, mergers, and conflicts are there? If you are a beginner using Git, these words would be unfamiliar to you. Git is a version control platform that allows several people to concurrently work on files and to push a local copy into the one that is saved in the cloud. This will overwrite the changes in the cloud with your local copy when you change any downloaded (or already pushed) code.

Git’s got a branch idea. A master branch is available and several branches are branched off. This error particularly happens when you move (using the checkout) from one branch to another, and files on the current branch are in conflict. You can’t swap branches if they’re not solved.

Causes the Git Error: You need to resolve your current index first

The reasons for this error are very small, as stated earlier. This error would occur to you because:

If Git doesn’t resolve the merge automatically, it will leave the index and the working tree in a specific condition that will allow you to have all the details you need to resolve the merge. Conflict-bearing files are particularly marked in the index and you will receive this error message before you fix “Error: You need to resolve your current index first” issue and update the index.

You can add your personal comment. An example is:

3. After you have resolved the conflict, try checking out of your existing branch and see if the problem is fixed.

Solution 3: Merge the current branch into the Head branch

If your branch has a lot of conflicts then delete the branch by executing the following command and make a new branch from the start.

I hope you will be able to correct the error after following the guide all over but comment below if you want more detail on the issue.